Far north of Helsinki, close to the Russian border and 40 miles from the nearest town, you need to take an unmarked turn-off down a snowy track to reach OH8X. As you crunch through the snow in twilight at -20C, watching out for reindeer and keeping the car pointing in the right direction on the ice, it is an amazing sight that greets you as you come around that last corner and arrive at the world’s biggest amateur radio beam.

The OH8X 160m yagi is a 3-element monster with 12.9dBi gain that stands over 100m high and weighs a staggering 40 tonnes. It occupies a site of around 29,000 square meters and was built from 450 meters of tower sections, which needed 600 litres of paint! The entire tower can be rotated on a 11kW motorised bearing, alone weighing in at two tonnes. Yet, this is an amateur radio antenna.

Last year I became aquainted with an team of Finnish radio hams who have achieved world-wide successes under the badge of “Radio Arcala”. Lead by Martti OH2BH, Juha OH8NC and Veijo OH6KN, they have turned their hand to extreme contesting, with a focus on technical innovations and bringing in new young hams to experience ham radio – and at a level few can reach, as you can see from the sheer scale of their antenna projects.

Martti OH2BH invited Olof G0CKV and I to come to Finland and see the station for ourselves. The purpose of our visit was to be a mixture of business and pleasure. The business matter was to attend a strategy meeting with the Radio Arcala team (we held a session to discuss the future trends of technologies such as the DX Summit, Reverse Beacon Network and propagation tools). The pleasure, of course, was to join world-famous contesters at OH8X for the CQ160 contest, which is an experience I will try and relay to you in a moment.

Exploring the technology hub of Oulu

During our stay in northern Finland, we were grateful to make visits to several interesting businesses in the area. Oulu is one of the most remarkable technology “hot spots” in Scandinavia. Many radio innovations, in particular, have their origins in Oulu. We enjoyed a visit to the Centre for Wireless Communications (CWC) at the University (http://www.cwc.oulu.fi), and learned how they have established a world-class research body funded mainly by industrial sponsors. We saw an interesting practical demonstration of a “cognitive” radio system, which can make far more efficient use of limited spectrum by co-operating with other users. This reminded me strongly of radio amateurs calling DX in a pile up!

We also visited Elektrobit (co-founded by our host, Juha OH8NC in the 1980s). If you have a high-end European car you may well have a Satnav powered by Elektrobit. Additionally, Elektrobit is a military communications specialist with electronic warfare and tactical communications technologies in its portfolio (see www.elektrobit.fi). Most interestingly, Elektrobit has fostered a strong culture of encouraging radio amateurs, and in fact in the reception of the building you will find a small radio shack with an FT-1000D, right alongside examples of military products. When did you last find a working ham station at a company headquarters in the UK?

Around Oulu there are many innovative new startups with RF at their heart. One such business is Kyynel, which was founded recently by Toni, OH2UA, who presented his business to us in person. For now, the specifics of this business are top secret, but you can imagine that a world-class contester with a deep knowledge of the HF spectrum and propagation might have something very special in mind! I learned that the name “Kyynel” is derived from a legendary Finnish wartime valve transceiver, which weighed under 2kg and was considered to be a revolutionary design in portable HF radios in the 1940s (see http://users.kymp.net/ilmakilta/kyynel.htm). During our meeting at Kyynel, Olof G0CKV was able to share useful experiences from his professional career at Inmarsat, which were well-received by Kyynel’s team. Watch out for this rising star of Finnish RF engineering excellence.

Of course, Radio Arcala itself is closely affiliated with Oulu University, Nokia, Elektrobit and Kyynel: many of the bonds between amateur radio, telecomms, engineering and education are exceptionally strong in Finland. These short company tours highlighted how each was in fact connected through ham radio.

After our work on the future of ham radio technology, it was time to visit OH8X and operate it in the CQ160 contest.

After arriving at the station in the icy cold, you enter a beautiful Finnish cabin and the warm. A quick tour is surprising; there is so much outside on the towers at OH8X, yet the shack seems unbelieveably tidy and well-organised, occupying just one modest room. In fact, the secret is that only the radios and amplifiers are in the shack! All of the coax (hard line) is brought into a separate building housing the cabling and a substantial workshop. All the switching gear (including hundreds of patch leads connecting different beams through relays) took a summer intern three weeks to prepare – the photo shows Veijo OH6KN explaining how the system works. It is on a scale I have never seen before.

Inside the shack, there are two Yaesu FT-5000 radios (highly regarded by Dxers and contesters for their excellent strong signal handling capabilities) and two OM Power amplifiers (built in a collaboration with Radio Arcala, they are fully automatic so as to be remote-controllable). There are touch screens for turning every rotator, and for selecting from every combination of transmit and receive imaginable. For example, you can transmit on the 160m beam and then listen on the 160m four square, or use the 8 different beverage directions for receive but transmit on the beam and four square simultaneously. Every possibility is only a click away.

The informatics for this one band are quite involved, but by no means is OH8X only for top band. The computer control system also handles six other huge towers, most over 60m high and some over 100m high, laden with stacks of yagis for every band up to 28MHz. Of particular note is the 4 x 6-element Yagi stack for 14MHz. That, alone, is a world class antenna which can place a dominating signal anywhere on the globe.

I should also mention that the entire station can be controlled remotely via the internet. Without a soul in sight, the power can be switched on and the system comes to life. A replica of the control interface is displayed in a virtual-reality world, and a real FT-5000 can be ganged to the operating table in the cabin via the internet, giving an almost identical operating experience to being there in person. It must be a shock to be standing nearby as the beams begin to turn, cracking the ice and snow. The extreme weather is easily managed by the heavy duty components (experience has shown that it’s safe to control OH8X without being at the site).

So, how does it perform on the air?

I’m afraid you are going to be disappointed by what follows, but it’s an interesting tale!

There is a problem operating from this far north, under the aurora or northern lights. At these latitudes, aurora is frequently in evidence and strongly absorbs on the low bands. On any given night, there is a high probability that signals will be extremely attenuated. I will try and quantify this effect for you by comparing transmit and receive link budgets. A more advanced analysis might be in order, but I have a simple comparison to offer which I hope will put the aurora into perspective.

Firstly, on receive there is a very profound benefit from the Arcala location. It is almost entirely noise-free, being far away from population centres and high power lines. On 160m I measured the noise at around S1 to S2 on the beam, and rarely more than S1 on the beautifully constructed low noise beverages. At home in Cambridge, I have a noise floor of S6 to S7 on my 160m ground plane antenna. OH8X can hear a pin drop compared to my underwhelming station.

Bear in mind that one S-unit is a difference of 6dB, so this means that the gap between S1 (at OH8X) and S6 (at G7VJR) is an extraordinary 30dB in received signal strength. On transmit, you may have seen the problem already. Let’s say you were in ‘G’ at my station transmitting with 100W and were heard at OH8X with strength S1 through the intense aurora. To make a QSO, starting with the same base of 100W, OH8X would need to add a further 30dB of power to get above the S6 noise floor in the UK. We’re talking about megawatts – and the gain of the huge yagi is already factored into the link budget! The legal limit, which is strictly observed at OH8X, is 1500W.

So, when you hear an S1 signal at OH8X, you spin the dial. Only signals of S7+ are likely to be workable (maybe a little less if the other station enjoys good receiving conditions and a low noise floor). But luck and perseverance can play its part, too. The aurora is not strictly blocking all directions at all times, although OH8X is under its spell a great deal of the time. When we heard gaps in the aurora, signals were generally 20dB over S9 in any direction (with the beam being generally 1dB to 2dB better than the 160m four square, should you be wondering if the project to build the beam was really worth it!). ZL and other DX was heard at S9.

When the aurora was in charge of the band we could not even work DL stations. It is a weird and frustrating experience to gaze out at the biggest beam you have ever seen, and not work Germany. The only viable way to make the QSO is for the the noisy receiving site at the far end to be improved: just one S-unit less noise would make a tremendous difference.

These effects become less serious as you move up to higher bands, but as this was the CQ160 contest I can report that we had plenty of time on our hands to compare received signals on different paths. I should point out that OH8X is equiped with a sauna – a good fall-back if the bands are beyond use!

To see a video of the Radio Arcala site, including the numerous beams and towers you need look no further than http://www.radioarcala.com. When you work OH8X on the air, you’re making a contact with a station run selflessly to explore the limits of our hobby – and on the low bands, you might be working them through a fleeting opening in the aurora, so don’t hang about!

Visiting the Radio Arcala team was inspiring, and OH8X is a masterpiece built despite its nemesis, the aurora. I would like to extend my thanks to Martti OH2BH, Juha OH8NC and Viejo OH6KN for allowing me to explore a new level of radio performance with their contest station, and in particular to Toni OH2UA who helped Olof and I to operate the controls without worrying about a thing. It was a great pleasure to explore the technology and the propagation and to share in the friendly, creative culture of Finnish extreme contesting with world class radio amateurs. 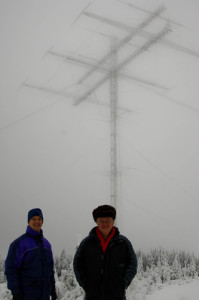 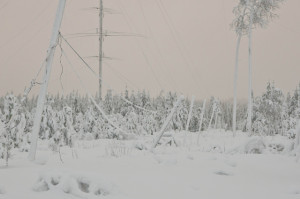 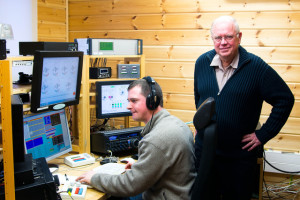 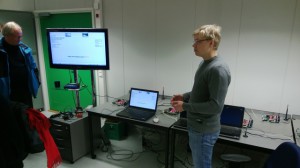 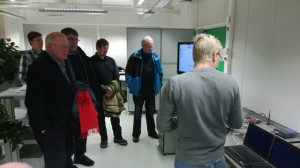 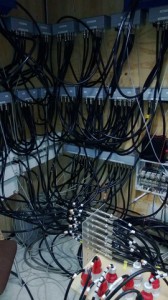 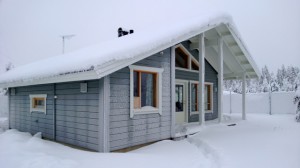 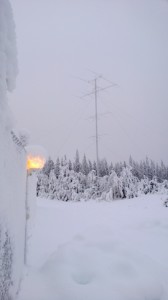 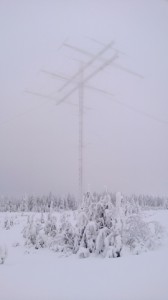 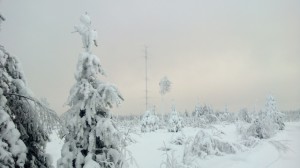 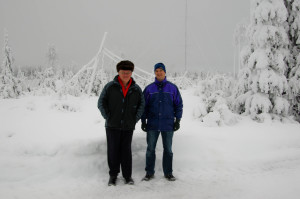