Update (15 June 2016): the team at Juma have posted their professional measurements here:
http://www.jumaradio.com/juma-pa1000/JUMA-PA1000-performance.html

Travelling light with a 500W+ station

The Juma PA1000 is a remarkably light 1000W solid state amplifier, and offers high levels of gain so that a QRP radio can be used to drive it to full output. You can read more about the amplifier on the Juma web site at: http://www.jumaradio.com/juma-pa1000/.

I bought this amplifier to pair with my Elecraft KX3 as I feel this is a formula for lightweight expedition travels, where I would like to run around 500W into mono-band verticals.

The Juma PA1000 has eight gain levels (G1 to G8) which can be selected on the front panel. The higher levels can be locked out if you are using a 100W driver. For my KX3, my target drive level is < 10W so all of the gain levels are in use. There is no ALC connector to intervene if you get this wrong. 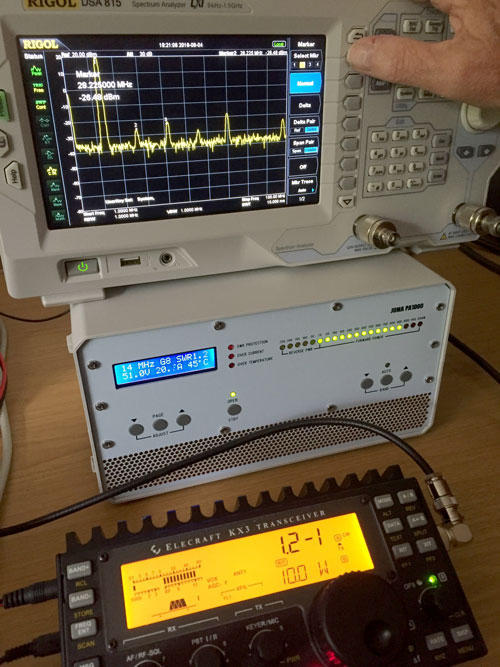 On 4 June 2016, Bob G3PJT and I ran some tests to measure the second and third harmonic output of the amplifier, as follows:

Hazard warning: this is not a scientific test and we hope no-one will make the mistake of using our results as a reference! This is just what we did to get a better idea of the amplifier’s performance. Since none of our readings are specially calibrated, maybe someone else will improve on our readings soon. (Update: see http://www.jumaradio.com/juma-pa1000/JUMA-PA1000-performance.html)

Before we started, the amplifier power meter was calibrated to Bob G3PJT’s reference LP-100A power meter. We used the Juma PA1000 service menu to do this. There is a menu for “Pwr Cal mult <30 Mhz” which seemed to be set to 1.20 at the factory. Setting this instead to 1.00 obtained accurate readings. Interestingly, 1.00 is the default value suggested in the manual, so I’m not sure why it was shipped to me set to 1.20. We found that the LED bar graph was accurate against the calibration reference. We also did a reference set of readings of the KX3’s output before putting the amplifier in-line.

Our first test was a conservative run on 14Mhz using the lowest gain value of G1. A power input of 10W gave an output of 300W. The second and third harmonic levels in our readings are both about -50dB down on the fundamental.

We decided to drive the amp harder. By setting the gain to G8, our power input of 10W gave an output of 900W. That’s the last green LED on the power bar graph! The harmonic levels in our readings are both about -45dB down on the fundamental.

The amp produces more power on the lower frequencies for the same drive, and we found that 10W of power input gave over 1000W of output power, lighting the first red LED on the power meter. This is much more power than I would consider using on the bands. It’s 100x gain, i.e. 20dB, and the quality of the driver is starting to get quite critical. We’re much closer to the limits of the Freescale device in the Juma PA1000 and I’d expect more problems now.

For this test run, the harmonics are -40dB on the second harmonic and -50dB on the third harmonic.

As well as the bench tests, the amplifier was tested in various ways on the air, including at 32 wpm using QSK CW. We didn’t find any problems with changeover or clicks, and the amp was obviously quite comfortable under real load testing on the bands. The fans run at a moderate speed and the temperature rises after a lot of CQing, but the noise is not intrusive.

We have not tested the amplifier into anything other than an ideal 50 ohm load, so do bear in mind that any mismatch and returned power is going to put some stress on the cooling and could necessitate using less input drive. The Juma PA1000 is also not rated for continuous use (like most amplifiers, you have to substantially drop the output power for RTTY).

Speaking for myself, I feel comfortable with the power levels in the harmonics (assuming our readings are representative, which I believe is a reasonable view). -40dB is one ten-thousandth of the fundamental, i.e. 100mW if the amplifier is operating at 1kW.

I always use mono-band antennas when I am on expeditions, as do many others. Harmonics would not be readily radiated by those antennas. That gives a useful extra bit of reassurance.

Using a KX3 seems to work well at 10W and it could certainly be used at a lower output if preferred (for example, to keep it cool). When the amplifier is using the lower gain levels (e.g. G1 to G4) this seems to me like a good portable arrangement. Keeping away from the limits of either the KX3 or the amplifier, you will still have a very substantial signal on all of the HF bands (comfortably 500W) as well as 6m. Although perhaps not perfect, I think the signal emitted would be of an acceptable standard.

This amplifier should help in years of low flux where the low bands will be important. The Juma PA1000 weighs only 5.5kg; easily within the hand luggage allowance on restrictive flights like the one I took to Lord Howe Island in April 2016. The weight saved is either helping avoid excess charges, or can be used elsewhere – for example, to pack some bigger poles and more wire!

Thank you to Bob G3PJT for the use of his analyser and dummy load.

On 27 April 2016, this article was posted on the ARRL web site: http://www.arrl.org/news/fcc-invites-comments-on-petition-to-eliminate-15-db-gain-limit-on-amateur-amplifiers.

In the July 2015 edition of RadCom, Peter Hart reviewed the Expert 1.3K-FA amplifier. Members can read his review and the associated measurements here: http://rsgb.org/main/blog/publications/radcom/2015/06/19/radcom-july-2015-vol-91-7/. Page 22 contains some useful notes on third order products.

For comparison, I read on page 54 of its user guide PDF that the figure for the 3rd order distortion of the Expert 1.3K-FA amplifier is -30 to -35dB in a two-tone test (this is not the same test as ours – it’s more stringent). The Expert uses the same Freescale device as the Juma PA1000 and has both FCC and CE marks, with its gain set at 14.5dB. The Expert does also have a wider range of software features, an ATU option, SO2R etc. so I will not try and make a direct comparison.